Have you ever considered a freelance career as a long-term alternative to being employed, and want to find out what it is all about? Or have you already been working as a freelancer, and want to improve the business side of things? Or are you just interested in the freelance economy and its future as a growing trend in the labor market? Either way, you’ll be at the right place, debating this fascinating topic with one of the leading experts on freelance business!

To jumpstart the debate moderated by Michal Andera, Robert will explain the basics, answering a few of Michal’s introductory questions. From there, we’ll move on to questions from the audience. However, the time for the debate is quite limited, and therefore we strongly encourage you to send in your questions in advance through an online form:
https://forms.gle/jevFwuLqRsPRfibJ9

Robert Vlach (http://www.vla.ch) is a senior business consultant, specialized in supporting independent professionals and business owners. In 2005, he founded one of the largest national freelance communities in Europe and later, in 2012, Europe’s first think-tank for freelancers which meets regularly in Prague and other cities. He has been holding freelancing courses for more than a decade, and has consulted on over 300 business cases with individuals, startups, and companies. His book about freelancing became an instant national bestseller and is now being sold worldwide as The Freelance Way. Robert lives with his family in the Czech Republic and Spain. 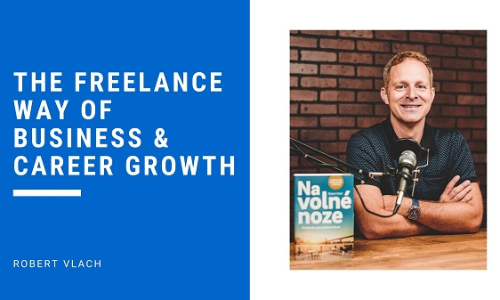