US professor Adam Kotsko is going to give a lecture with a following debate about Neoliberalism - get ready for an interesting perspective.

Neoliberalism is primarily considered an economic logic which promotes ideals of ‘free trade’, and reduces the role of government to a facilitator of deregulation and privatisation. But accompanying the economics has always been a particular worldview or ideology, and neoliberalism in fact relies on a whole social system of support and legitimation.

In his new book, Neoliberalism’s Demons, theologian and social theorist Adam Kotsko considers neoliberalism as a form of political theology, to understand how it functions in societies not only as a mode of economics, but also politically and culturally as a moral order.

Adam Kotsko teaches in the Shimer Great Books School of North Central College. He is the author, most recently, of Neoliberalism’s Demons (Stanford University, 2018) and The Prince of This World (Stanford University, 2016), and the translator of many works by Giorgio Agamben. Visit his professional site for more information about his work, including links to articles and interviews. 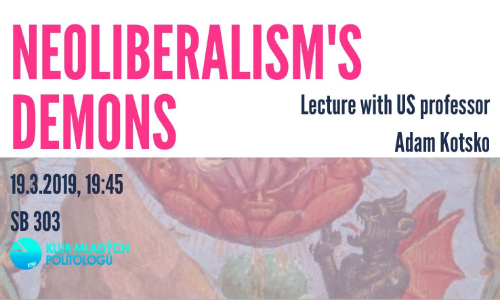